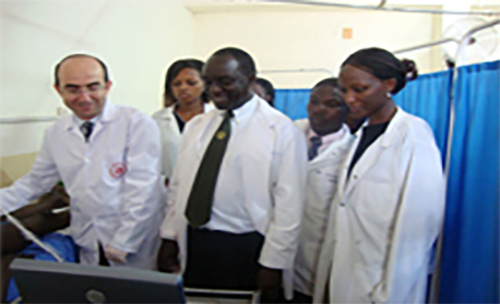 Vision
Advisory Board
Board Of Directors

When and How Did MIP Start?

Dr. Vikram Dogra was privileged to be invited to visit Uganda for two weeks as a RSNA International Visiting Professor in 2007.  In these two weeks, he saw how people could do so much with so little. Twelve radiologists were serving 28 million people with a few ancient ultrasound machines from the 1970s and one CT machine. There was not an MRI in all of Uganda in 2007. It was a humbling experience. These two weeks  in Uganda changed his life. Dr. Dogra always wanted to devote his time to share his expertise with less privileged nations and within two years of this visit the Medical Imaging Partnership (MIP) was born in 2009.

MIP owes its existence to a small group of committed radiologists from around the world who came together at the annual Radiology Society of North America (RSNA) meeting in Chicago in December 2008, and the collective dream we had about a healthier world enabled by medical imaging. After our discussion, an action plan was charted out.  By the spring of the following year, that dream had become a reality. In fact, MIP’s advisory committee includes some of the world’s most well-respected imaging specialists from Chile, China, Egypt, El Salvador, Guatemala, India, Israel, Italy, Singapore, South Korea, Tunisia, Turkey, United Kingdom, Uganda, and the United States.

Since it’s conception nearly a decade ago, MIP has evolved into a dynamic and progressive global network of medical imaging professionals as well as other medical practitioners and researchers, committed to making real progress in bringing much needed medical imaging resources to underserved populations around the world. For more details, please visit our web page discussing our current and ongoing projects.